The exhibition ”Human Rights, Civic Courage, and Heroes” will be staged on controversial sites around the world. Welcome to the inauguration ceremony on the 25th of June at 7 P.M. at the former torture center, Villa Grimaldi, Av. José Arrieta 8401. Peñalolén, Santiago.

As the National Stadium of Chile did not authorize the exhibition of Human Rights, the location is changed to the former torture center at Villa Grimaldi, which used to function as a clandestine torture center for the DINA, Dirección de Inteligencia Nacional, a special unit directly under the Government who specialized in intelligence service and torture, under the dictatorship of Augusto Pinochet.

The 15th of July to the 15th of August the exhibition will be on show at the “Museo de la Memoria y los Derechos Humanos” in Santiago de Chile.

Human Rights, Civic Courage, and Heroes
Through Portraying Human Rights the Edelstam Foundation aims to inform and educate about the content of United Nations Declaration of Human Rights (UNDHR), and the importance of each article and relate them to concrete examples through using real heroes, in order to inspire people to show civic courage.

The Exhibition
The exhibition “Human Rights, Civic Courage, and Heroes “which portrays each article in the United Nations Declaration of Human Rights (UNDHR), is painted by the artist, Mr. Carl Adam Cronstedt, and will be staged on controversial sites around the world and the first location is the National Stadium in Chile. Requests have been sent to exhibit the portraits of Human Rights at Guantanamo Base, Memorial da Resisténcia in Sao Paolo, the Vatican State (Sixteenth Chapel), and the former concentration camp at Auschwitz. 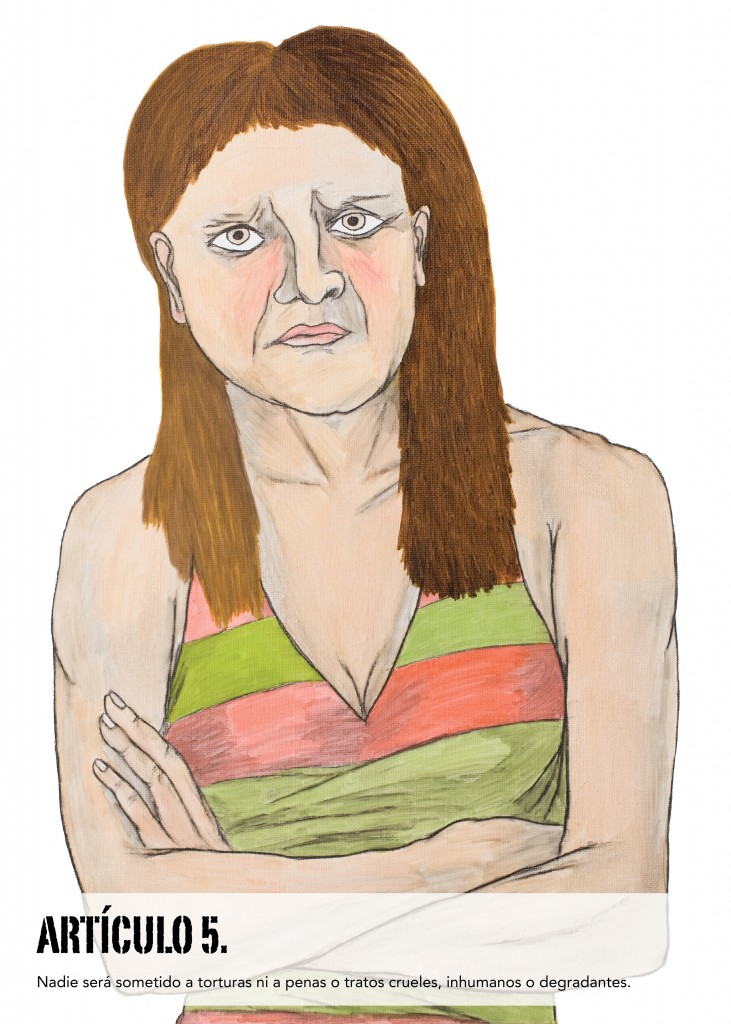 The exhibition is part of the extensive educational project ”Human Rights, Civic Courage, and Heroes.” Through combining the Human Rights and exemplifying them with heroes who have played an essential role in relation to each article of the UNDHR, we will make the concept of Democracy and the content of UDHR available to everyone, through art, literature, discussion, and physical expression. The Edelstam Foundation through the project portrays, distributes, discusses, and dances Human Rights.

Villa Grimaldi
Villa Grimaldi used to function as a clandestine torture center for the DINA, Dirección de Inteligencia Nacional, a special unit directly under the Government who specialized in intelligence service and torture, under the dictatorship of Augusto Pinochet. Soon after the coup, DINA implemented their activities with the “Operation Condor,” a campaign of political repression and terror involving assassination and intelligence operations officially implemented in 1975 by the right-wing dictatorships of the Southern Cone of South America. The program aimed to eradicate communist or Soviet influence and ideas and to control active or potential opposition movements against the participating governments. During 1973-78, 236 prisoners passed through the gates of Villa Grimaldi. During the Dictatorship of Augusto Pinochet 38 000 persons were tortured, and more than 3 000 persons appears to have been executed.

The 26th of June 2013, is the “International Day in Support of Victims of Torture.”

This is a day on which we pay our respects to those who have endured the unimaginable. This is an occasion for the world to speak up against the unspeakable. It is long overdue that a day be dedicated to remembering and supporting the many victims and survivors of torture around the world.

Are human rights for sale?
Yes and no. The “articles” (art pieces) are for sale, and will be part of the discussion material: “Is it possible to buy a Human Right; is the price different of each article; is the Right not to be tortured more expensive than the Right to holidays with pay?“ Through buying an article one participates in the education of the importance of Human Rights and Civic Courage. The teaching of Human Rights consists not only of the learning of principals, but also the “practical wisdom”- the ability to conform the principals to sensitivity for the concrete circumstances without a self-interest. We need heroes to set examples.