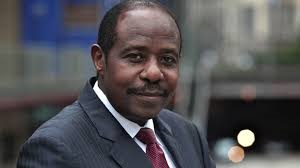 Paul Rusesabagina, Board Member of the Edelstam Foundation, and the humanitarian whose true story was told in the movie Hotel Rwanda has been arrested while traveling. We believe he was kidnapped and taken by extraordinary rendition to Rwanda. He is being held by President Paul Kagame’s government on false charges. Rusesabagina is a regular critic of human rights violations in Rwanda, and the Rwandan government regularly brings false charges against all critics in order to try to silence them. No one from his family has talked to him.

Paul Rusesabagina, a former hotel manager whose story has been told in the movie Hotel Rwanda and in his autobiography, An Ordinary Man. As portrayed by actor Don Cheadle in the film, Rusesabagina saved the lives of 1,268 people during the 1994 Rwandan genocide. Mr. Rusesabagina served as manager of the Hotel des Mille Collines in Kigali and risked his life to shelter Hutus and Tutsis who were seeking refuge from the genocide that killed more than 800,000 people. Ever since, he became a government critic and a human rights activist.

According to an article on August 31 in the New York Times: “The Rwanda Investigation Bureau said in a statement on Twitter on Monday that Mr. Rusesabagina was suspected of being “the founder, leader, sponsor and member of violent, armed, extremist terror outfits,” including the Rwanda Movement for Democratic Change and the Party for Democracy in Rwanda, both opposition parties”.

“Paul is a courageous hero, a true international humanitarian, and an important role model for how humanity should act in dangerous situations when domestic authorities fail to respect and ensure fundamental human rights. Retaliatory actions by a government of this kind are outrageous, and we encourage the international community to take on responsibility, which has a responsibility for establishing justice, ensuring the protection of victims, and upholding the principle that nobody is above the law. Enforced disappearances are grave human rights violations. They are criminal acts, without exception and regardless of circumstance, including state of war, emergency or national security,” says Caroline Edelstam, President of the Edelstam Foundation.

Paul Rusesabagina is 66 years old, and in addition to being a survivor of the Rwandan genocide, he is a cancer and heart survivor who needs regular medication. His family is deeply concerned for his health while he is wrongly confined.

In 2000, Mr. Paul Rusesabagina received the Immortal Chaplains Prize for Humanity. In 2005 he received the highest civilian award in the United States, the Presidential Medal of Freedom, from President George W. Bush. That same year, Mr. Rusesabagina was also honored with the National Civil Rights Museum Freedom Award and the Humanitarian Award from the Conrad N. Hilton Foundation. After receiving these honors, he formed the Hotel Rwanda Rusesabagina Foundation to help provide voice to victims of genocide and support peace efforts in Rwanda and throughout the world. What started as a personal mission to teach the lessons of Rwanda has become an international movement to fight genocide throughout the world.

The Edelstam Foundation exists to encourage civic courage in Ambassador Harald Edelstam’s spirit by working with formation of opinion and advocacy, education and information, research, and observation within the Defence of Human Rights. In addition, the Edelstam Foundation administrates the Edelstam Prize awarded for outstanding contributions and exceptional courage in standing up for one’s beliefs in the Defence of Human Rights.

The Edelstam Foundation and the Edelstam Prize is named after, and awarded in the memory of the Swedish diplomat and Ambassador, Harald Edelstam (1913-1989). Harald Edelstam distinguished himself as a diplomat by his professional competence, his bravery and his civic courage in the fight for Human Rights. He was an early proponent and symbol of what is today known as the “Responsibility to Protect” and his memorable acts contributed to save more than a thousand lives, in Norway during the Second World War and in Chile during and after the coup in 1973.