The Laureate 2014 was announced during a press conference Monday 10th of November at 10 A.M., at the Army Museum (Armémuseet), Riddargatan 13, Stockholm in “Vindsrummet” in the Eastern wing. 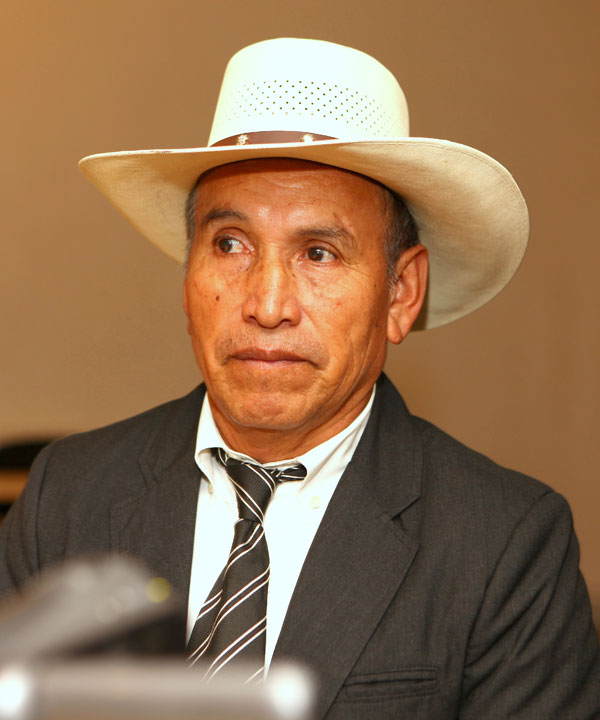 Bejnanmin is born 31st of March 1953 and is a Achí Mayan community in Guateamala. He comes from peasant family who have been cultivating vegetables for their survival. The community was aware of the conflicts in the country, and they were part of every day life. Howver, they managed to survive because they were civilians, and not belligerent. One day, in the early 1980’ies, they became involontarily involved in the conflict, beacuase the army and the para-militarians begun to target the civilians and this is when the hundreds of massacres of innocent, defenseless, Mayan civilians begun.

On the 18 of June, 1982, the soldiers came to his village, Pland de Sanchez, in the mountains on the highlands of Guatamala. Benjamín and his brother managed to escape and were hiding in the edge of the forrest for many hours. They were wittnessing the soldiers killing his family, his neighbours, his whole community, 75 meters away from them.The soldiers came by lunch to Plan de Sanchez, and they ordered the villagers to pack themselves together in Benjamín sister’s house. The women who were carrying small children on their backs were forced to leave them on the court yard and the girls between 12 and 18 were forced in to another house.

Five o’clock later that day, the soldiers started to shoot in Benjamíns sister’s house. Not until eleven o’clock in the evening the guns went quiet. People were still alive by then and the small children were running around in the courtyard screaming. The soldiers threw gasoline on the house and then put it on fire.

Then they grabbed the children in their little legs, hammering them hard against the ground and threw them into the fire. Afterwards, the soldiers went to the house where all the women were locked up. They brought them out, one and one, and raped them, tortured them, and finally murdered them brutally. Benjamin and his brother could hear the screams and breath the smell. Finally, they managed to escape up in the mountains during the night the very same day and returned to the village next morning by eight.

Upon their return, some of the people in the house were left with body parts outside the house and were still alive. They wined, they suffered, however, they died very soon as well. Among the dead was Benjamin’s wife and 14 other relatives. Only 20 villagers survived this terrible day, this inhuman massacre, where 256 persons were tortured to death.

Benjamín has fought for his family and his neighbours in the village and is the former President of and has been working for the ”Associacion for Justice and Reconcilation,” (AJR) an organisation working for collecting tesminonies and building the case for prosecution of General Montt. AJR was created in 2000 by men and women of 22 communities, witnesses of 23 massacres, with the purpose of receiving recognition for human rights and to inforce the rights of the victims of the internal armed conflict to spread the historic truth of the facts that happened against the indeginous population. AJR is represented in five regions in those which most of the 623 massacres were committed. Benjamín has been the legal consellor for the 98 persons who survived from the Ixil area that wittnessed against the General and Dictator, Efraín Rios Montt, in the trial that took place in the spring of 2013, for a 80 years sentence in prison, accountable of genocide hold quilty for 11 massacres out of the 623 actual. Efraín Rios Montt took power and took over the presidency of Guatamela in March 1982 until August 1993, when he was defeated by the Dictator Mejía Victores. This is the same time as the massacre occured. Many people was living under constant fear for their lives, and had to hide every night.

Ríos Montt was convicted to 80 years in prison, at the age of 87. But as many times before in Guatemala, the country’s political-economic elites worked against justice. The people high up in society’s hierachy has historically managed to escape justice. In May this year, the Constitutional Court declared that the procedure had been wrong and part of the trial has to be repeated. Actually, the complete trial has most probably to start over again because the Judges who took part in the first trial and pronounced the judgment won’t be permitted to try again the same case. Consequently, the trial must be reinitiated in January 2015, before the same High Risk Court, but with different Judges.

The civil war in Guatemala lasted for 36 years. More than 200,000 persons were killed; most of them (93%) were victims of the country’s military and paramilitary forces.

“Benjamín Manuel Jerónimo is a Mayan from Guatemala. Mayan communities, in spite of being the majority of the population, have been exploited, discriminated, and victimized in their own homeland for centuries. The worst period came between 1960 and 1996: egregious abuses of human rights were perpetrated in Guatemala during the internal armed conflict. According to the CEH (UN backed Truth Commission) 200,000 civilians were murdered and 50,000 forcefully disappeared. Most of them, 83%, were defenseless indigenous Mayans, being 93% of the abuses caused by the State. After the signature of the Peace Agreements, nobody was made accountable for these heinous crimes.

Benjamín considered that those responsible for the crimes should be brought to justice. It was not an easy task, since the discrimination, threats, retaliations and violence persist in Guatemala, and the rates of violent deaths double today those of the war. Benjamín represents the voice of the victims; courageous and tirelessly has worked for decades, in defense of human rights, truth and justice for the indigenous communities in his country, despite repeated threats against his life. His endeavor and commitment are an example and remember every day to the international community than most of the perpetrators in Guatemala remain unpunished.

Through for working the Association for Justice and Reconciliation (AJR), Benjamín has managed, overcoming the fear and breaking the silence, to organize the victims and collect their testimonies, playing an essential role in making finally possible the trial against the dictator Efraín Rios Montt, first time in history a former head of state has been made accountable in his own country for the crime of genocide.”

“Justice is essential for us, because we are all equal, have the same rights, we are all human beings and we deserve our right to life and welfare to be granted. For this we have given our efforts and leading this initiative, we were almost forced to abandon our families. We are only pursuing justice to ensure that these crimes will never happen again. We believe our loved ones who were massacred are not yet resting but we have to do something for them as they express to us in our dreams. To expose what they suffered and claim for justice, and maybe they would then feel a little bit more happy,” says Benjamín Manuel Jerónimo, the Edelstam Prize Laureate 2014.

With this Prize, the Edelstam Foundation would like to call the attention of the media and the public opinion about the fact that we need the extraordinary courage of individuals like Benjamín, or other victims, activists, lawyers and a few judges and prosecutors, who risking their own lives are making possible that perpetrators of terrible abuses face trial and be made accountable before Courts of Justice. In countries like Guatemala, in which the institutions of the security and justice system are extremely weak if not hostile to this effort, it is not surprising that the historic conviction of General Ríos Montt on counts of genocide was declared void one week later. When the domestic authorities themselves are unable or unwilling to provide justice for victims, there is a responsibility for the international community. The last chance for Guatemalan authorities will come in January 2015, when the trial is scheduled to recommence.