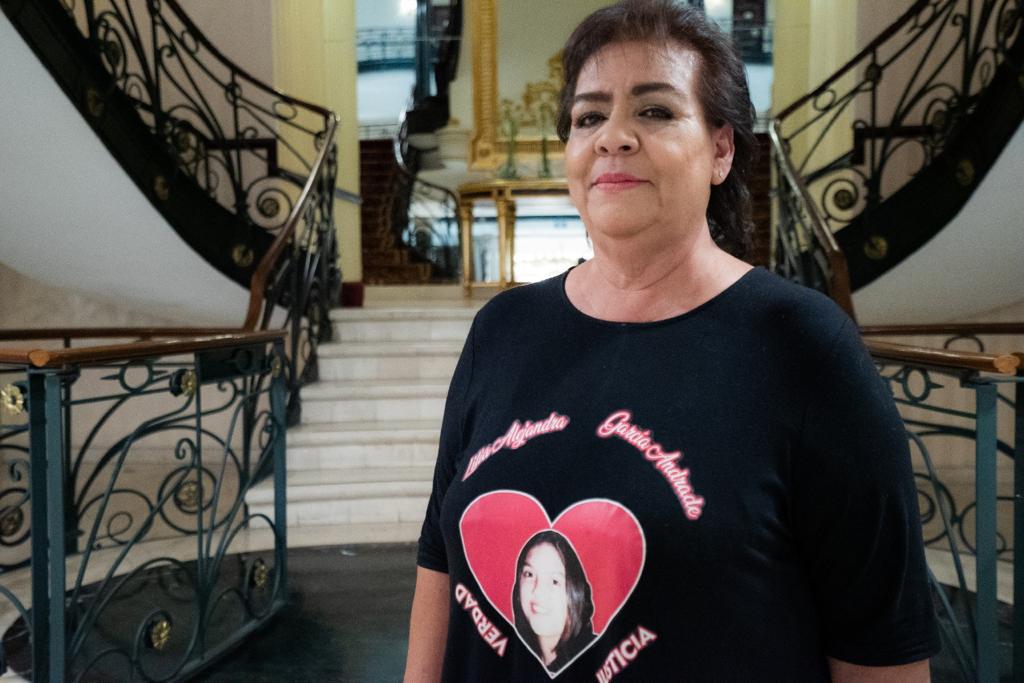 The Edelstam Prize 2022 is awarded to Ms. Norma Esther Andrade for her outstanding contributions and exceptional courage in standing up for one’s beliefs in the Defense of Human Rights. The prize will be awarded during a ceremony at the House of Nobility in Stockholm, Sweden, on November 22, 2022.

Ms. Norma Esther Andrade from Ciudad Juárez, Mexico has dedicated her life to fighting for the justice of women throughout Mexico, since her 17-year-old daughter was kidnapped, disappeared, and brutally murdered in 2001. Since then, Norma has tirelessly defended women’s rights, despite numerous death threats, continuing being a beacon of hope for women around the world fighting for human rights. She has played an instrumental role in the recognition of femicide as a new category of crime in the Mexican criminal code.

Femicide – killing of women or girls only because they are female

Femicide, murder of women simply because they are women; crimes not investigated properly, and many times remain unpunished. Ms. Norma Andrade fights to achieve justice, not only for her daughter’s case, but for the many women who have disappeared in Mexico. Through putting pressure on the Mexican government to fight impunity and solve the murders and counteract the prevalence of femicide, she has raised awareness of and advanced legislation on the femicides in Mexico.

Ms. Norma Andrade’s work puts her life at great risk. She has been advised to leave Mexico for her security, but since she wished to remain, she now lives under police protection 24 hours a day.

“The courageous activity of Ms. Norma Andrade has contributed greatly to assist many mothers to raise their legal cases and has contributed to change the legislation on femicides in Mexico. The Inter-American court in 2009 ruled that the killings of women constituted an infringement of the right to life, integrity, and personal freedom and that the Mexican government had violated the right of the victim’s families to access justice and judicial protection. Still, there is no proper implementation and enforcement of the laws in Mexico, and Ms. Andrade is still waiting for a date for the trial of her daughter’s case,” says Caroline Edelstam, Chair of the Edelstam Prize Jury and co-founder of the Edelstam Foundation.

Impunity: looking the monster in the eye and holding its gaze

In Mexico, women and children fear gender-based violence every day since impunity still prevails. Until 1993, more than 400 women had disappeared in Ciudad Juárez, and the organization Nuestras hijas de Regreso a Casa founded by Ms. Norma Andrade saw it as their mission to urge the Mexican government to fight impunity and to rectify the prevalence of femicide. Approximately 98% of crimes remain unsolved, according to the 2018 report of the Special Rapporteur on Human Rights Defenders. According to an article in the Guardian on April 26, 2022, Mexico last year recorded 1,015 cases of femicide, compared with 977 in 2020. Overall, about 3,500 women were killed.

Ms. Norma Esther Andrade has advocated women’s rights in platforms such as marches, forums, and public events, both in Mexico and abroad. In Mexico, she has been one of the most vocal and persistent voices against femicide; the murder of women simply because they are women. Today, femicides are included in the Mexican Federal Penal Code.

“Ms. Norma Andrade represents the voice of the many voiceless female victims whose cases have never been solved. Justice must prevail; the systematic impunity in Mexico and the fact that some states still do not distinguish femicide as separate crimes from homicides, is highly alarming,” says Caroline Edelstam.

The Edelstam Prize Jury’s motivation to give Ms. Norma Esther Andrade the Edelstam Prize is: Norma Esther Andrade is a human rights defender who has dedicated her life, taking serious risks, despite numerous threats against her life, to fight for the right to justice of women, in Ciudad Juarez, Chihuahua, and throughout Mexico. She has played an instrumental role in the recognition of femicide in the Mexican criminal code as a new category of crime: the murder of women simply because they are women.

Women and children fear gender-based violence every day, as impunity still prevails in Mexico and about 98 percent of crimes remain unsolved according to the 2018 report of the Special Rapporteur on Human Rights Defenders. In 2009 the Inter-American Court of Human Rights ruled in the Campo algodonero case that the killings of the women violated the rights to life, integrity, and personal freedom and that the Mexican government had also violated the right of the victim’s families to access to justice and denied proper judicial protection.

Norma Esther led an unremarkable life until her 17-years old daughter disappeared and was found brutally murdered in 2001. This completely changed Ms. Andrade’s life because she was denied one of the most basic human rights, the right to justice. She represents the voice of the voiceless, the victims who are never given the opportunity to be heard. She has courageously and tirelessly continued, beyond her daughter’s case, fighting for justice for the invisible victims of the femicides, crimes that are never properly investigated and remain mostly unpunished in Mexico. She has continued working despite repeated threats against her life, and her forced displacement from Juarez. Ms. Norma Andrade’s work helped many mothers of lost daughters to pursue legal cases searching for justice and the rule of law, while also putting pressure on Mexican institutions to better protect women.

Through her tireless work with “Nuestras hijas de Regreso a Casa” defending every mother’s right to get justice, she has fearlessly managed to mobilize those forces that are raising awareness nationally and internationally about femicides and women’s rights in Mexico. After the murder of her daughter, Ms. Norma Andrade felt she was forced to become an activist. She subsequently had to leave her hometown to live in an undisclosed location, under permanent police protection. This was just one of the prices she had to pay for so courageously and persistently defending the right to justice.

The Edelstam Prize is named after, and awarded in memory of, the Swedish diplomat and Ambassador, Harald Edelstam (1913-1989). Harald Edelstam distinguished himself as a diplomat by his professional competence, his bravery, and his civic courage in the fight for Human Rights. His memorable acts contributed to saving more than a thousand lives.

The winner of the Edelstam Prize can be a private person or a person who serves in Government, international or national organizations. The winner shall be an individual who has acted in Ambassador Harald Edelstam’s spirit in a country/countries where Human Rights, according to international law, have been violated. The laureate must have shown outstanding capabilities in analyzing and handling complex situations and in finding ways, even unconventional and creative ones, to defend Human Rights. The candidate has, presumably in a complex situation, been able to take a decisive role in helping threatened people or directly saving human lives. Civic courage is a central parameter in the selection of the successful candidate.

Members of the Jury

The international jury is chaired by Ms. Caroline Edelstam, Harald Edelstam’s granddaughter and co-founder of the Edelstam Foundation. Other members are the Nobel Peace Prize Laureate 2003 Judge Shirin Ebadi, who represents Asia. Africa is represented by Dr. Fatou Bensouda, former Chief Prosecutor of the International Criminal Court (ICC) and Dr. Pascoal Mocumbi, former Prime Minister of Mozambique. Ambassador Eileen Donahoe, Executive Director of Global Digital Policy Incubator at Stanford University’s Center for Democracy, Development and the Rule of Law and the former US Ambassador to UN Human Rights Council represents North America. Professor Philip Alston, former UN Special Rapporteur on extreme poverty and human rights, represents Oceania. Latin America is represented by Magistrate Patricia Linares Prieto, former President of the Special Jurisdiction for Peace (JEP). Europe is represented by former Judge Baltasar Garzón, who served on Spain’s central criminal court, who is known for having indicted the Chilean dictator, General Augusto Pinochet for the deaths and torture of thousands of victims from Chile and other countries.