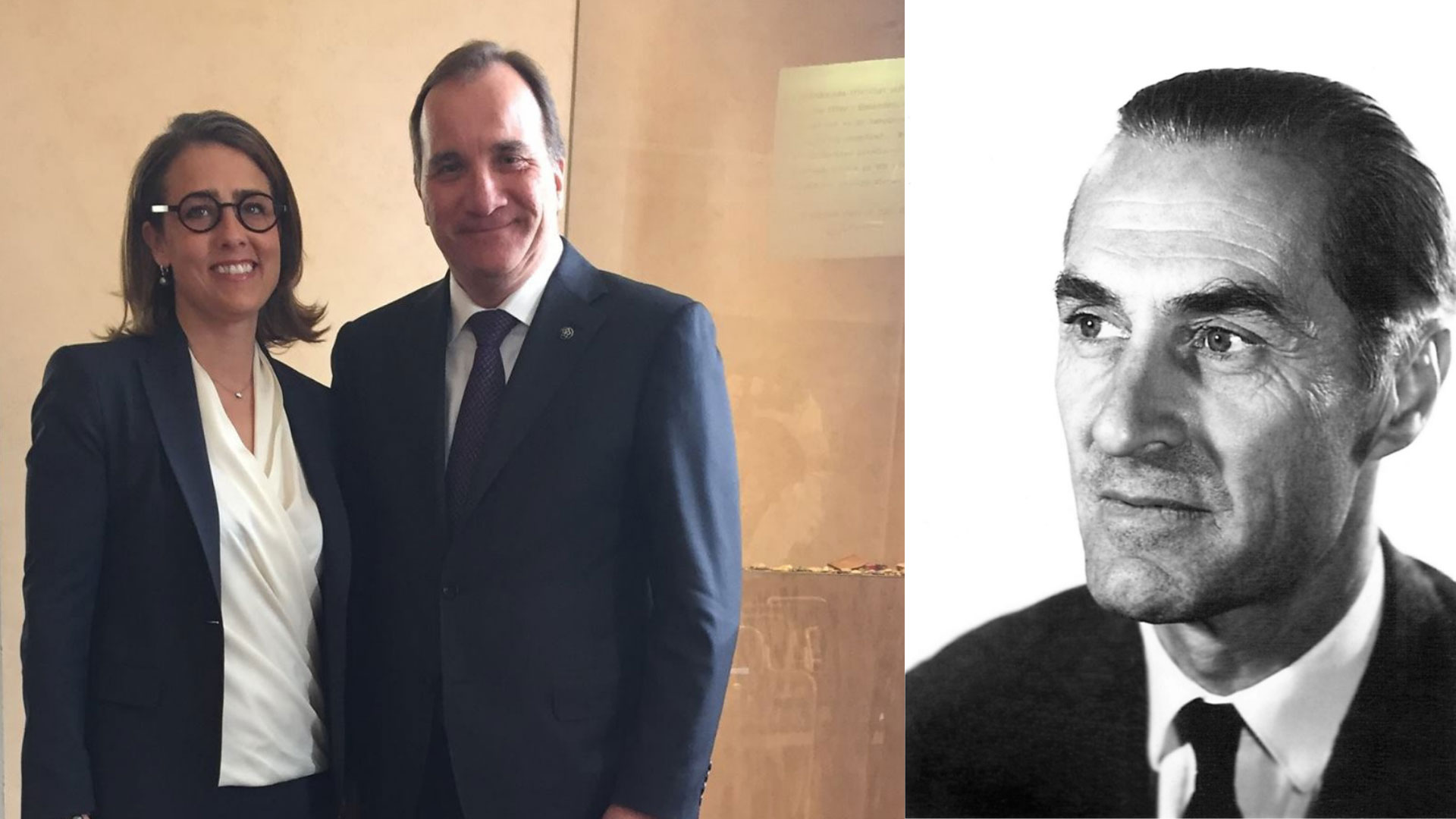 The Edelstam Foundation appoints Sweden’s former Prime Minister, Mr. Stefan Löfven, as a new member of the Board of Directors. The foundation is a politically and religiously independent organization, working internationally with human rights advocacy in defending human rights. The foundation also awards the Edelstam Prize biannually for outstanding contributions and exceptional courage within the defence of human rights in the spirit of Ambassador Harald Edelstam’s name and work.

“I am excited to help raise awareness of the great civic courage shown by so many persons around the world. They fight with great risk to their own lives and safety to defend the rights of others, and it feels important to support them through the Foundation’s work, in the spirit of Harald Edelstam”, says Mr. Stefan Löfven, board member of the Edelstam Foundation.

Civic Courage Even More Important in a Tough Society

Mr. Stefan Löfven is currently chairing the UN High Level Commission “Our Common Agenda” together with Ellen Johnson Sirleaf, former President of Liberia. Further, he will take over as the Chairman of SIPRI, the Stockholm International Peace Research Institute, in June this year. Mr. Löfven was previously a member of the board of the Edelstam Foundation from 2012 until he became Prime Minister in 2014.

“We are  deeply honored that Mr. Stefan Löfven is returning to the Foundation’s work. We have a great task ahead of us, working to preserve human dignity and rights, and I highly value his experience with leadership in the high-political international climate in which we often work. Especially in these times, it takes great bravery and civic courage when democratic values and human rights are violated in the most egregious ways”, says Caroline Edelstam, Chair of the Harald Edelstam Foundation.

The Board of Directors as of before are Ms. Caroline Edelstam, Co-Founder and President, Mrs. Lise Bergh (Vice President) former General Secretary of Amnesty Sweden and former President of Save the Children Sweden, Mr. Paul Rusesabagina, a Rwandan humanitarian known for aiding people during the Rwandan genocide (today imprisoned by Rwanda’s government on false charges), Dr. Brian Palmer, social anthropologist lecturing about civic courage at the University of Uppsala, Ambassador Karl-Erik Norrman, Secretary General for the European Cultural Parliament, Dr. Juan E. Méndez, United Nations’ former Special Rapporteur on Torture, and Ambassador Hans Corell, former Swedish Judge of Appeal and former Under-Secretary-General for Legal Affairs and the Legal Counsel of the United Nations, and Dr. Lennart Aspegren (LL.D. h.c.), former Swedish Judge of Appeal, who when ranking as an Under-Secretary-General of the United Nations, served as a judge on the International Criminal Tribunal for Rwanda (ICTR).

“Through Mr. Löfven’s solid international experience, we wish to strengthen our work with supporting people in vulnerable situations and to increase the importance of civic courage in society. We further hope to recognize even more courageous human rights defenders, activists, and whistleblowers around the world for their great civic courage”, says Caroline Edelstam, president of the Edelstam Foundation.

The Swedish Diplomat and Ambassador, Harald Edelstam (1913-1989) is internationally known for having saved a large number of persons after the military coup of Augusto Pinochet in Chile, in 1973. Edelstam, also referred to as the Black Pimpernel, is also known for having saved the lives of hundreds of Norwegian resistance fighters and Jews in Nazi-occupied Norway during World War II. The Harald Edelstam Foundation also administers the Edelstam Prize, which is awarded for outstanding contributions and exceptional courage in the defence of human rights.

Mr. Löfven was the Prime Minister of Sweden from October 2014 to November 2021 and Leader of the Party of the Social Democrats between 2012 and 2021. He has many years of experience from Swedish Industrial and Metal Workers Union, where he served as the International Secretary and as the President from 2006 to 2012. Mr Löfven has several board appointments behind him such as the Swedish Trade Union Confederation 2006-2012, the Royal Institute of Technology in Stockholm 2010-2012, Olof Palme’s International Center 2002-2006 and as Cice Chairman of the Export Council 2004-2012.

The Edelstam Foundation stands for a humanistic view, based on the values and principles that are mainly expressed in the United Nations’ Declaration on Human Rights from 1948, along with the conventions that followed and internationally accepted public law. The Foundation is a politically and religiously independent organization.

Members of the Board of Directors today are Ms. Caroline Edelstam, (Co-Founder and President) Mrs. Lise Bergh (Vice President) former General Secretary of Amnesty Sweden and former President of Save the Children Sweden, Mr. Paul Rusesabagina, a Rwandan humanitarian known for hiding and protecting more than 1200 Tutsis and Hutus from being slaughtered by the Interahamwe militia. The film “Hotel Rwanda” tells the story of his courage. He was kidnapped in August 2020 by President Paul Kagame’s government and is still imprisoned on false charges. Further, Mr. Stefan Löfven, Co-Chair of United Nations’ Commission “Our Common Agenda” and former Prime Minister of Sweden, Dr. Brian Palmer, social anthropologist teaching about civil courage at the University of Uppsala. He previously held the Torgny Segerstedt Guest Professorship at Gothenburg University in Sweden and is a former lecturer at Harvard University, Ambassador Karl-Erik Norrman, Secretary General for the European Cultural Parliament, Dr. Juan E. Méndez, United Nations’ Special Rapporteur on Torture, and Ambassador Hans Corell, former Swedish Judge of Appeal and former Under-Secretary-General for Legal Affairs and the Legal Counsel of the United Nations, and Dr. Lennart Aspegren (LL.D. h.c.), former Swedish Judge of Appeal, who in 1995–2000, ranking as an Under-Secretary-General of the United Nations, served as a judge on the International Criminal Tribunal for Rwanda (ICTR).  He was one of three judges who in 1998 in the case “The Prosecutor v. Jean Paul Akayesu”, the first genocide trial in history, ruled that also rape could constitute genocide.

The Nomination Committee is chaired by Mrs. Lise Bergh, former General Secretary of Amnesty Sweden, and on the Committee are also Professor Vitit Muntarbhorn, United Nations former Special Rapporteur on the Situation of Human Rights in Democratic People’s Republic of Korea, Deputy Tucapel Jiménez, member of the Chilean Chamber of Deputies’ Commission for Human Rights, Ambassador Bruno Stagno Ugarte, Deputy Executive Director for Advocacy at Human Rights Watch, former Foreign Minister of Costa Rica and former Ambassador to the United Nations. On the committee is also Mr. Lee Cheuk-yan, who is the General Secretary of the Hong Kong Confederation of Trade Unions, and the chairman of Hong Kong Alliance in Support of Patriotic Democratic Movements in China, currently imprisoned due to his participation in a pro-democratic march. Mrs. Wanja Lundby-Wedin, vice-chair of the Central Board of the Church of Sweden, former President of the European Trade Union Confederation and former President of the Swedish Trade Union Confederation, Ms. Parul Sharma, Principal of The Academy for Human Rights in Business at CSR Sweden, a human rights lawyer with extensive experience in CSR issues in so-called high-risk countries, Mr. Stuart Russel, Co-chair of the Monitoring Committee on Attacks on Lawyers of the International Association of People’s Lawyers (IAPL), and Ambassador Emilio Barbarani, who was stationed in Santiago de Chile after the coup in 1973, where he and his colleagues managed to save 750 refugees during the military repression in Chile in the Italian Embassy.

Mr. Benjamín Manuel Jerónimo from Guatemala receives the Edelstam Prize for this pursuit of justice in Guatemala