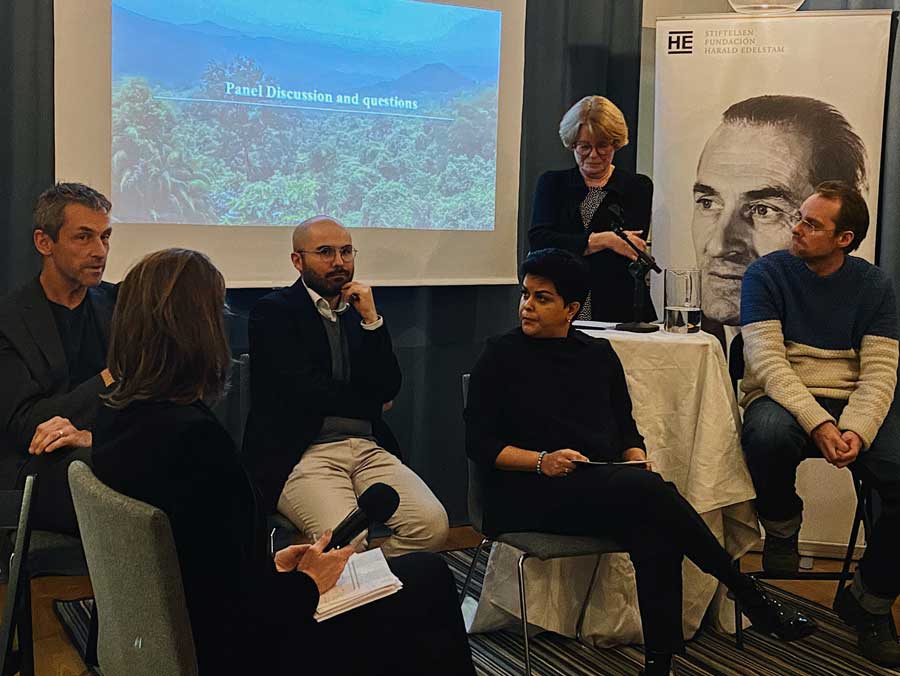 During a ceremony in Stockholm, Sweden, the Edelstam Foundation announced that it is now opening their Call for Nominations for the Edelstam Prize 2022. The nomination is open and candidates may be submitted by anyone. The Edelstam Prize is awarded every second year for outstanding contributions and exceptional courage in standing up for one’s beliefs in the Defence of Human Rights. The laureate will be awarded during a ceremony on November22nd 2022 at the House of Nobility in Stockholm.

A seminar with the Edelstam Prize Laureate 2020, Mrs. Osvalinda Marcelino Alves Pereira, from the Pará region in Brazil, and the current illegal logging situation in Brazil, was part of the ceremony. As a rainforest defender and community organizer she has fearlessly and continuously been reporting to federal authorities illegal logging of the forest in the Areia region. Mrs. Osvalinda Alves Pereiraputs herself at great risk in defending the forest and its population. Defending the forest from illegal logging is very dangerous, as laws are rarely enforced against the perpetrators of the abuses. Criminal logging networks deploy men to protect their illegal activities and intimidate, threaten and kill those who obstruct their activities which are causing the deforestation and destruction of the Amazon rainforest.

“In situations of widespread violations of human rights, those who are willing to risk their personal safety to defend the rights of others, not only save lives, but most importantly preserve for all of us the essential value of human dignity is of importance,” says Lise Bergh, Chair of the Edelstam Prize Nomination Committee.

“We want to award those who have the courage to stand up for their convictions, the courage to act to defend the rights and safety of others even when it involves a personal risk, even when they face threats of powerful opponents, and it is not easily mobilized. The everyday heroes are the human right defenders, the activists and whistle blowers all over the world; those who risk their future, and maybe their families’ safety to fight for the rights of others,” says Caroline Edelstam, Chair of the Edelstam Prize Jury.

New Member of the Jury

Further, the Edelstam Prize Jury is announcing the Gambian lawyer and former first Prosecutor of the International Criminal Court (ICC), Dr. Fatou Bensouda, as a new member representing Africa on the international prize jury where each continent is represented.

The Edelstam Prize is named after, and awarded in the memory of, the Swedish diplomat and Ambassador, Harald Edelstam (1913-1989). Harald Edelstam distinguished himself as diplomat by his professional competence, his bravery, and his civic courage in the fight for Human Rights. He was an early proponent and symbol of what is today known as the” Responsibility to Protect” and his memorable acts contributed to save more than a thousand lives.

The Nomination Committee is chaired by Mrs. Lise Bergh, former General Secretary of Amnesty Sweden and former President of Save the Children Sweden, and on the Committee are also Professor Vitit Muntarbhorn, United Nations Special Rapporteur on the situation of human rights in Cambodia, Deputy Tucapel Jiménez, member of the Chilean Chamber of Deputies’ Commission for Human Rights, Ambassador Bruno Stagno Ugarte, Deputy Executive Director for Advocacy at Human Rights Watch and Costa Rica’s former Minister of Foreign Affairs and Ambassador to the United Nations. On the committee is also Mr. Lee Cheuk-yan, who is the General Secretary of the Hong Kong Confederation of Trade Unions, and the chairman of Hong Kong Alliance in Support of Patriotic Democratic Movements in China, Mrs. Wanja Lundby-Wedin, former President of the Swedish Trade Union Confederation and former President of the European Trade Union Confederation, Ms. Parul Sharma, Principal of The Academy for Human Rights in Business at CSR Sweden, a human rights lawyer with extensive experience in CSR issues in so-called high-risk countries, Ambassador Emilio Barbarani, diplomat, author and human rights defender, and Mr. Stuart Russel, human rights lawyer and Co- Chair of the Monitoring Committee on Attacks on Lawyers of the International Association of People’s Lawyers (IAPL).

The Jury
The international jury is chaired by Ms. Caroline Edelstam, Harald Edelstam’s granddaughter and co-founder of the Edelstam Foundation. The 2003 Nobel Peace Prize Laureate, Judge Shirin Ebadi represents Asia; Africa is represented by Dr. Pascoal Mocumbi, former Prime Minister of Mozambique and by former Chief Prosecutor of the International Criminal Court (ICC), Dr. Fatou Bensouda, Ambassador Eileen Donahoe, Executive Director of Global Digital Policy Incubator at Stanford University’s Center for Democracy, Development and the Rule of Law and former US Ambassador to UN Human Rights Council represents North America. Professor Philip Alston, UN Special Rapporteur on extreme poverty and human rights, represents Oceania, and Europe is represented by Judge Baltasar Garzón, who served on Spain’s central criminal court, who is known for having indicted the Chilean dictator, General Augusto Pinochet for the deaths and torture of thousands of victims from Chile and other countries.

Announcement of the Edelstam Prize Laureate 2014