Bahareh Hedayat – The Laureate of the Edelstam Prize 2012

The Edelstam Prize Jury’s motivation to give Mrs. Bahareh Hedayat the Edelstam Prize is: “Mrs. Bahareh Hedayat has through her outstanding courage and commitment to justice actively worked against the violation of the Human Rights in Iran. Despite of serious warnings and threats from the regime’s security and intelligence forces, she has repeatedly risked her own life and freedom when defending the Human Rights. She has been arrested upon several occasions, and is imprisoned right now for these reasons. The Harald Edelstam Foundation considers her a prisoner of conscience, and in consequence respectfully asks the authorities of the Republic of Iran to set her free.” 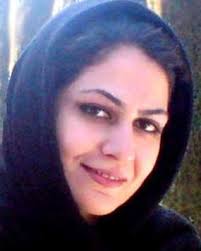 Bahare Hedayat was born in 1981 in Iran. While studying at the Economic and Finance University of Tehran, she became increasingly involved in student activism in support of democracy and reform. Since 2001, she became an active member of her university’s student association. Simultaneously, she joined the largest nation-wide student association called “Daftar-e Tahkim Vahday Daneshjouyan” (the Office for Strengthening Unity among Students).

At the same time, Bahareh became very active in the women’s rights movement in Iran. She played a leading role in founding the Women’s Commission of the student movement in 2005 in order to encourage a larger participation among female students and promote gender equality and egalitarian attitudes in various student activities. She was influential in integrating women’s rights demands within the discourse and publications of the student movement. Bahareh also played a key role in the founding of the One Million Signatures Campaign for changing the discriminatory laws against women, so far the largest and most prominent grassroots move in the contemporary women’s rights movement in Iran.

Bahareh Hedayat was one of the few leading female activists and therefore elected to the Central Committee of the Office for Strengthening Unity, the largest university student union in Iran, with the highest number of votes. She stood out as the only woman in that rank. She was in charge of the public relations of the Office and also accepted the responsibility of being in charge of the human rights committee in that same Office. In her capacity, she continuously pursued the cases of abuse of human rights in the universities in Iran and reported them to the related organizations. Her pursuing and reporting on cases of rape of female university students in various universities such as Razi, Kermanshah, Zanjan, and Sahand in Tabriz are among her most courageous activities. She was also involved in the investigation of the legal situation of students who were arrested or expelled from universities and denied the right to continue their education only because of civil rights and student’s rights activism.

Bahareh was unanimously reelected to the Office in the following term of elections by the general assembly. She once more accepted the responsibility of being in charge of public relations as well as being its spokesperson. On June 15, 2006, as the secretary of Women’s Commission of the Student Union, Bahareh participated in organizing and issuing a call to protest against the discriminatory laws against women. While taking part in that peaceful rally, she was faced with severe police brutality and was arrested for the first time. She was charged with unlawful assembly and sentenced to two years imprisonment, which was
suspended for five years. However during the following year, in spite of the warnings and threats she received from the security and intelligence forces, she did not stop her activism. She organized several meetings and seminars on various subjects such as “The Women’s Movement and Democracy” and “The Women’s Movement, Threats, and Resistance,” which were very well received among the political and civil society organizations as well as women’s rights activists.

Bahareh was arrested again on July 9, 2007, along with five other members of the central committee of the Office while organizing and attending a sit-in in front of the Amir Kabir University to protest the unwarranted detention and torture of students. After spending one month in solitary confinement, she was released on a heavy bail. A year later, she was rearrested again on July 13, 2008, on her wedding night, and was released again after spending one month in solitary confinement. Bahareh Hedayat was arrested yet again at the beginning of the Iranian New Year in 2009 for participating in a peaceful assembly of the family of the political prisoners in front of the Evin prison.

Like many other members of the Office, she was an active critic of President Mahmoud Ahmadinejand’s policies. Following the fraudulent presidential election that maintained Ahmadinejad in power, and the widespread fraud and crimes committed by the security forces, such as the nightly attacks on the university campuses and the brutal injury of students in their dormitory, Bahareh Hedayat, as one of the key figures in student movement, became the main target of arrest by the security forces. They raided her house twice in June and in August of that year to arrest her but did not succeed in finding her in the house. As a result of her message to the university students in Europe on the Student Day, November 17, 2009 (broadcast online), as well as her message of December 7, 2009 (Student Day in Iran), addressed again online to a meeting held in Holland in solidarity with the Iranian students inside Iran, Bahareh Hedayat was arrested on December 30, 2009. Following this arrest, Bahareh was tried in Branch 28 of the Revolutionary Court headed by Judge Maqiseh, and was sentenced to nine and half years punitive imprisonment. She was charged with propaganda against the regime for her interviews with the foreign press, insulting the Leader (Vali Faqih), insulting the President, acting against national security by participating in social and public gathering, and helping organize group protests. All together she received seven and a half years of imprisonment for the aforementioned charges and two years of suspended imprisonment for acting against national security. And organizing an unlawful assembly on June 12, 2006 was added to her charges. This judgment was upheld in the Court of Appeal, Branch 54 of Revolutionary Court in July 2010.

Bahareh has now been imprisoned now for two years. For extended periods of time during this period, she was deprived of all her basic rights such as the right to have a lawyer, telephone conversations with her family, or meetings with visitors. In December 2010, following her message to the Iranian students sent out from inside the prison, Bahareh was charged again with propaganda against the regime and acting against national security and was denied all her lawful entitlements in prison: she was completely denied of any contact with her family, and was put on trial. She was initially sentenced to six months punitive imprisonment, which she appealed and is presently being reviewed in the Court of Appeals. So far Bahareh has been under extreme pressure from the security forces as well as the judiciary to petition for forgiveness and amnesty by expressing regret about her past activities and positions. However she has bravely refused to accept this precondition for her release.