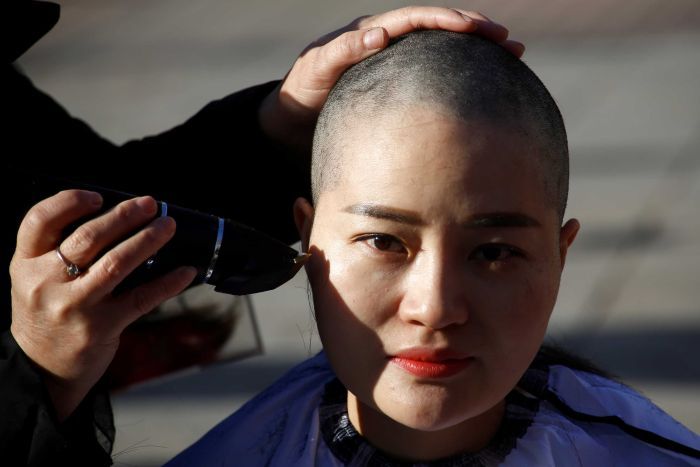 The Edelstam Prize 2018 Laureate, Mrs. Li Wenzu from China, together with three other fellow wives of China’s most prominent right lawyers and activists on Monday shaved their heads in protest of the “persecution” of their husbands by the Government, according to Reuters.

Reuters reports that the wives gathered in the central park of a sleepy Beijing apartment complex in front of neighbours and a small group of invited foreign journalists. They took turns in shaving each other’s hair, placed the hair in transparent plastic boxes, with the pictures of their husbands on top of it, and then went to China’s Supreme People’s Court to petition over their husbands’ treatment.

“They [the Government] keep on shamelessly breaking the law. So today we are using this hairless act in protest to show they are persistently and shamelessly breaking the law,” says Mrs. Li Wenzu in a film by Reuters. We can go hairless, but you cannot be lawless,” they announced and the end of the ceremony, a pun in Chinese, as the words for “hair” and “law” sound similar.

The Edelstam Prize 2018 was awarded to Mrs. Li Wenzu from China for outstanding contributions and exceptional courage in standing up for one’s beliefs in the Defence of Human Rights, during a ceremony on November 27, 2018. Unfortunately, the laureate, Mrs. Li Wenzu, could not travel to Stockholm to receive the prize as she is not allowed to leave the country.

“The Edelstam Foundation has after awarding the prize been approached by the Chinese government, who opposes the decision of the Foundation to award the prize to Mrs. Li Wenzu, claiming that “her husband is a criminal and that she interrupts order, according to Chinese law.”

However, the Foundation maintains that China remains an authoritarian one-party state that systematically curtails a wide range of fundamental human rights, including the freedom of expression, association and assembly, and using a system of enforced disappearances.

Mrs. Li Wenzu’s husband, Mr. Wang Quanzhang, is held in legal limbo, charged with inciting subversion of state power. No date of trial has been announced. According to Reuters, both Mrs. Wenzu and seven lawyers she has appointed to try to represent Mr. Wang have been unable to visit him.

“The attention that Mrs. Li Wenzu and the other wives bring, not only to their husbands’ plight, but also to the state of the crackdown, is an important tool in fighting back with untraditional methods. We stand firmly to our decision to award the Edelstam Prize to Mrs. Li Wenzu and our statement: The Edelstam Foundation respectfully asks the authorities of the People’s Republic of China to put an end to the harassment, threats and retaliatory actions against Mrs. Li Wenzu and her child because of her courageous and noble fight. We also ask the Chinese Government to end the sustained suffering of Mrs. Li Wenzu and her child by granting the life and integrity of Mr. Wang Quanzhang, revealing his whereabouts, (respecting his right to be visited and assisted by a lawyer), and freeing him together with other still imprisoned lawyers and activists of the “709 Crackdown,” says Caroline Edelstam, President of the Edelstam Foundation.